Today, technological evolution is moving forward at a fast pace, and lately we have seen many impressive examples of innovation, which are bound to change the relationship between man and machine. In many cases, the purpose of these technologies is to make everyday life more convenient and improve our wellbeing – but it can also help people to fulfil tasks that they are not able to manage on their own. This is notably the case of many healthcare innovations, whose technology helps people who suffer from various ailments.

Revolutionizing brain scanning innovation
With the mobile brain scanner, some patients who were believed to be in a vegetative state can now communicate with the outside world. The portable brain scanner detects brain activity via a network of electrodes placed on the scalp. The scanner has been tested on 16 patients, who were asked to imagine clenching then relaxing their right hand and their toes. The test showed amazing results: three of the patients who were thought to have no consciousness were able to show that they were aware of what they were being asked. This device is not to be confused with the portable scanner mentioned in last week’s article about the Quantified Self conference.

Philips app measures vitals using iPad camera
Philips just launched an iPad 2 app called Vital Signs Camera, which measures the user’s heart rate via the camera of the tablet by determining the user’s blood flow based on his or her skin colour. Additionally, it measures the users’ breathing patterns by analyzing the motion of his or her chest. It of course also allows you to share this data on social networks. Philips underlines that the app is not intended for diagnosis! 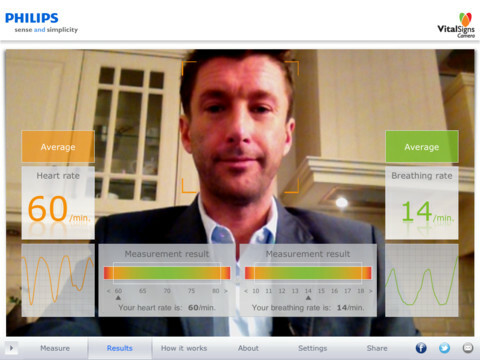 Bionic contact lens ‘to project emails before eyes’
No, it’s not something from a science fiction movie. You will soon be able to wear contact lenses that project images in front of your eyes! The technology will allow users to safely read texts and emails while augmenting their sight with computer-generated images. The developers intend to embed hundreds of pixels in order to produce complex holographic images. The advantage of such a solution is, for instance, that it would allow for drivers to see GPS directions or vehicle gauges without taking their eyes off the road. It would also come in handy for diabetes patients, as it could provide real-time blood sugar levels by linking to biosensors in the wearer’s body. The only snag is finding a good power source, as for now the device only works if it is within a few inches of its wireless battery.

Innovations for patients with missing limbs
We’ve previously mentioned the story about Tim Hennes, who can move his bionic arm merely by thinking of it. This is a stunning example of how technology can improve patient’s lives. Less revolutionizing but still extraordinary is the prosthetic arm with an embedded smartphone docking station. This great innovation, developed by Trevor Prideaux who was born without a left forearm, will make everyday life more convenient for smartphone users with missing limbs, as the device is otherwise not ideally suited to be used with only one hand.

Do you have any other examples of amazing health innovation to share with us?