During the past few years, the levels of childhood obesity have been increasing at an alarming rate in Europe and the US, mostly because of the spread of children’s consumption of junk food  and of sedentary lifestyles. Video games, television, unhealthy family eating habits are just some of the factors that push children in becoming overweight or obese. Recently, various efforts have been made in order to include technological innovations in the fight against childhood obesity and, thankfully, the results appear more than promising.

MOVband
MOVband and the MOVband Challenge is a new program that has been launched in the United States and includes a wristband and a fundraising platform that enables communities to raise money to improve the wellness and health of their children. MOVband’s designer, a teacher and fitness instructor, realized that kids around her did not exercise enough and decided to create a gadget specifically for them. The unique reward system of that program encourages children to do their best and engage in a friendly competition. Every kid starts with a black band and as they walk more, they can get different colors to add to it. Also, what makes MOVband different is the fact that it can be loaned to schools that want to help their students but do not have the budget required to invest in an innovative solution.

S2H Replay
Switch2Health is another wristband/activity-tracker that uses a reward system in order to motivate children to stay active: it generates a reward code for every 60 minutes of physical activity!  Children can wear S2H Reply while walking, running, playing, etc., and when they achieve 60 minutes of accumulated exercise, they are alerted and a code is displayed on the wristband’s screen. Then they can log onto the Switch2Health website whenever they want, log their points and cash them in to win various prizes (movie tickets, MP3 downloads, gift certificates, etc.). On the other hand, if the child doesn’t move enough, a sad face appears on the screen. Parents can also get involved in the program by wearing their own wristband and creating fun challenges for them and their children! 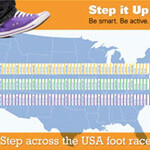 Step It Up is an activity program that was designed for the public schools of Boston and incorporated technology, educational feedback and teamwork, in order to raise awareness about the importance of physical exercise. In 2011, nearly 200 elementary students and teachers received their “sneaker chip” pedometers to track their steps and the minutes of their activity, and participate in the program. Each week, the classrooms were provided with Step Reports for each student and also information relating to activity, nutrition and health. To engage the students more, the teachers grouped them by classroom and invited them to compete and find out who will “step across the USA” faster!

So what do you think? Could self-tracking and connected objects help prevent or even treat childhood obesity?