Weight Loss: the power of feedback loops (how often should I weigh myself?)

“What could I, an overweight doctor, learn from the thin journalist speaking about a household device that, when used regularly, could help me lose some pounds and keep them from finding their way back to my belly?”. 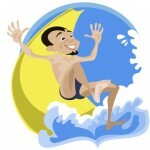 Losing the pounds for good

I had lost a bunch of pounds in the past (training for a marathon), only for most of them to make a round trip, and was interested in a new strategy to keep off the pounds I had just recently lost again while training for my second marathon. And losing more belly fat would uncover my abdominal muscles and help me to finally realize my lifelong dream of being a model for waterslide park advertisements.

Being aware is the first step

Mr. Thomas Goetz, who was editor of WIRED magazine at the time, was giving his presentation. He stimulated me to ask myself, “How often should I be weighing myself?”. Hourly? Daily? Weekly? Every seventeen years when the male cicadas emerge from their subterranean dwellings and serenade us? Seems like a pretty basic question, but one I had never considered, which is unfortunate given the growing body of evidence suggesting frequent scale stepping might be beneficial.

The power of feedback loops

Mr. Goetz was describing the power feedback loops have to change behavior. I vividly remember his presentation slide projecting a picture of a “dynamic speed display” sign – one of those signs on the road that displays your speed for you (and others) to see as you drive by, giving feedback about your current speed right above a speed limit sign.

Have you ever slowed down as you approached one of these tools of traffic control? Me too. In fact, these displays decrease the average speed of traffic by about 10%, which is rather interesting considering that these displays are not connected to either a local police station or the NSA (although I have not verified this with Mr. Snowden).

Mr. Goetz then showed us a graph that his scale had created for him. With each weighing, his Withings scale wirelessly communicated the data to the scale’s website, which displayed the data demonstrating the downward trend of his weight. I was envious of both his sustained weight loss and his cool scale. 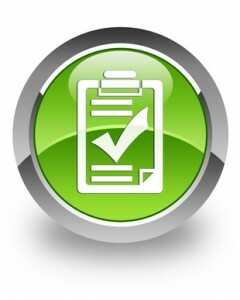 After losing 35 pounds training for my first marathon, I regained most of it back. Attending the conference just four days before I would be running my second marathon, I realized I did not have a plan to do anything differently after this second marathon to prevent the 35 pounds I had lost a second time from yet again reestablishing themselves on my belly.

Just as drivers respond to feedback about their speed by slowing down, Mr. Goetz was suggesting the number on a scale could be part of an important feedback loop for myself. After the marathon, if I stepped frequently on the scale, this feedback could motivate me to take whatever necessary actions.

Mr. Goetz is not the first to assert the benefits of knowing one’s weight. Coin operated scales that were once commonplace in the 1930s touted the health benefits as well. A sign on one French scale read: 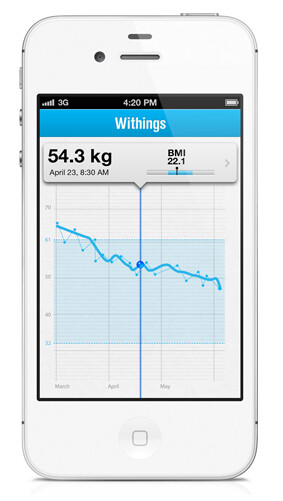 How often should I weigh myself?

Research investigating the frequency of weighing is beginning to support these claims. Drs. Rena Wing and James Hill, developers of the National Weight Control Registry, track over 10,000 individuals who have sustained significant weight loss for over a year.

75% of these individuals get on their scale at least once a week.

So how often should you weigh yourself? I’m not sure I can answer that for you, but I would definitely encourage you to discuss this with your doctor.

As for myself, I bought a Withings scale about a week after running my second marathon and have been weighing myself several times a week since then.

While I still await that lucrative contract to be a model for waterslide advertisements, I now have my own graph that depicts how few of the pounds I lost training for the marathon have found their way back.