March 8 marked the beginning of Daylight Savings Time (DST) in the United States. At 2AM, we pushed the clocks forward one hour to 3AM, thus losing one hour of the night. Withings conducted a study to analyze the effect this spring forward has on people’s sleep patterns.

In actuality, we learn that people wake up approximately 30 minutes later the next morning, as compared to a normal Sunday. Because of this shift in wake up time, people are only losing 30 minutes of sleep, instead of the hour we would expect. 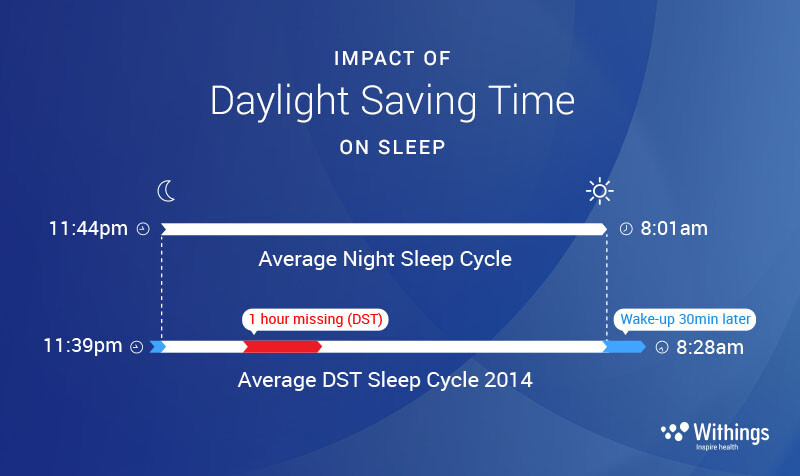 The days that follow DST, we notice a trend that shows people go to bed and wake up five minutes later than normal. Although five minutes isn’t a significant different, since we notice this trend to be widespread, it is worth examination. It is likely that people experience difficulty falling asleep after the time change. Similar to a jetlag effect, it takes our body a few days to readjust to the new time. If you normally go to bed at 11PM, it will feel like 10PM, which could be too early and lead to extra minutes spent trying to fall asleep.

Do you find yourself snoozing in the day after DST? Because it feels like it is an hour earlier, our bodies often experience extra difficulty trying to get out of bed in the morning.

Not to worry! Our data shows that the effect seems to last only one week. The week after DST, the times for sleeping and waking up return back to their normal levels.