A Withings employee recently got back into cycling and helped raise money along the way. This is his story. 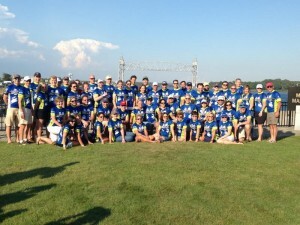 Mark Prince is a Withings employee who literally went the extra mile(s) to live up to our tagline, “Inspire Health.” The following is his story, told in his own words.

Back In The Saddle

At some point around 1986, I discovered that I could ride my bike up the steepest street in my town – an improbable 18% grade leg-buster – with relative ease. Then years went by, time on the bike became rare, and any type of hill became anything but easy.
Decades passed. In 2013, I started riding again, regularly. This past August I pedaled about 350 miles for the month, which included participation in the Pan-Mass Challenge. I know these are not huge numbers for an avid cyclist, but they represent a personal victory: August 2015 was my best month on a bike in years. This is how it happened.
Two years ago, around the same time I started riding again, I met Diane Legg. Diane is the founder of Team Lungstrong, a group of about 60 riders that participate in the Pan-Mass Challenge, or PMC for short, each year. Founded in 1980, the PMC has raised almost $500 million for the Dana Farber Cancer Institute to date, and become the largest athletic fundraiser in the United States.

Diane patiently yet persistently stayed in contact and shared information about the PMC and by the time 2015 rolled around, I was putting in miles – usually a minimum of 50 miles each weekend – and ready to commit. Inspired by Diane’s story, I also asked Withings to sponsor Team Lungstrong – and the company said yes.

Withings’ motto is “Inspire Health”, and what better way to walk the walk — or in this case, bike the bike — than to sponsor a team that rides to stop cancer? Plus, Withings’ North American HQ is in Massachusetts, so the PMC provided an excellent way to become involved in the local community. Supporting Dana Farber via the PMC and LungStrong was an easy choice.
For my inaugural PMC, I participated in the Sunday ride from the Massachusetts Maritime Academy in Bourne on Cape Cod to the Babson College campus in Wellesley, MA. The PMC guide listed the route as 80 miles. I joined two teammates and departed at 5:30am and finished right at 12:00, which included two 30-minute water stops.
It’s 100% true that anyone can complete the PMC. I was amazed and inspired to see men and women of all ages and abilities participate. It’s not a race, and while it may sound like a cliché, it’s absolutely true that everyone who participates wins.
As we say at Withings, “small steps and smart choices” can make a big difference… If you’re considering a ride like the PMC, my advice is: watch your weight and track your activity leading up to the event, and spend as much time in the saddle as possible. Your weight makes a difference on the bike – consider that it’s much easier (and cheaper!) to eliminate 2-3 pounds or more from your midsection than from your bike. No need to carry the extra baggage – especially on the hills. For the event itself, start hydrating a few days in advance, and continue throughout the event. The PMC guide recommended drinking 1 liter per hour. I used a mix of water and electrolyte solution and felt good at the end of the ride, and the next day. Take your time, and most importantly – have fun. 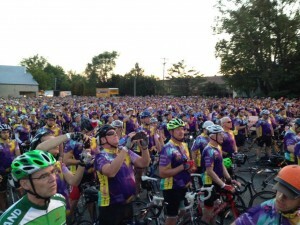 For me, the PMC inspires in at least three ways:

To date, Team Lungstrong has raised over $1.4M. For 2015, the team has raised $400k toward the total PMC goal of $45M for the year.
To Diane and the rest of the LungStrong Team: Thanks for the inspiration. I will aim for the 160 mile ride in 2016…
***
Thanks to Mark for sharing his story.
For more bike-spiration, check out our interview with CX rider and frame-building legend Richard Sachs.