In 2015, Penn Jillette lost 100 pounds and credits one man—Ray Cronise—with saving his life. We interviewed the scientist, author, and diet coach about his research, his Kickstarter campaign, and why he recommends people buy our scale before embarking on a weight-loss journey. 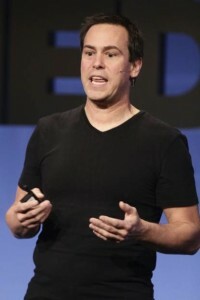 Frustrated by decades of dieting and exercise that ended with scale numbers higher than he’d started, former NASA scientist Ray Cronise, pictured, wanted to find a solution. In 2008, he was intrigued to hear that Olympian Michael Phelps ate 10,000 calories a day during training and theorized that the swimmer might be burning the extra calories to keep his core temperature constant in the cold pool. He then decided to turn himself into his own guinea pig to try and prove it—putting his own body into mild cold stress with winter walks minus a coat, cool showers, and sleeping without a blanket. He claimed this is why his rate of weight loss doubled and he dropped 30 pounds in six weeks.
For the past six years, Cronise has kept the weight off using a combination of mild cold stress, healthful sleep cycles, and eating mostly, but not exclusively, fruits and vegetables. His approach has been called extreme, but Cronise says the way most people live and eat today is actually a radical departure from our natural state and is likely the root cause of the obesity epidemic.
Cronise’s experiment drew attention. He was featured in “The 4-Hour Body” by Timothy Ferris and shared his story at TEDMED in 2010. Cronise also began coaching people to help them lose weight using his lifestyle changes. He requires all his clients to get a Withings scale so he can track their progress with them. In 2015, the magician Penn Jillette, a long-time pal of Cronise, enlisted his help to lose weight and the performer famously dropped 105 pounds in four months.
In 2014, Cronise published The “Metabolic Winter” Hypothesis, his first peer-reviewed article on the subject with collaborators Dr. Andrew Bremer of the National Institutes of Health and Dr. David Sinclair, renowned longevity researcher at Harvard University. The article was a launching point for his current research into why people gain weight.
Cronise also launched a Kickstarter campaign to crowdfund “Our Broken Plate,” a book that investigates how almost two centuries of well-intentioned nutrition advice and food advertising may have unintentionally made us less healthy. Not a diet book, Cronise said “Our Broken Plate” aims to change the way people look at all diets so they can make lasting lifestyle changes that improve their “healthspan.”
Withings spoke with Cronise on the 18th day of a 21-day, medically-supervised fast he undertook hoping to dispel myths about what happens to metabolism during prolonged stretches without food. He was recreating significant research from nearly a century ago as research for his book and does not recommend people do this for weight loss.

How are you feeling?

Ray Cronise: What I want to demonstrate with the fast is that nothing tragic happened in 18 days. I’m certainly not on my death bed. I’m running around working. I don’t feel any different than I did on day one. I feel perfectly normal. As normal as I can be, obviously.

Why are you doing these tests?

Cronise: I’m spending a lot of time learning about why we gain weight. Once you learn why you gain weight, you have clarity. Then, after you lose just like Penn did, when you gain a few pounds back, you know exactly what happened. I’m also interested in dispelling a lot of myths about how we lose weight as well. There is this ubiquitous belief that making our metabolism go up and down is the secret to weight loss or weight gain. A person will absolutely just dig in about what they know about metabolism and yet, when you ask, they’ve never measured a metabolism. Part of the problem is (nutrition, exercise and weight loss tips are) like the telephone game. So rather than be the person who read something and throws it out there and says, ‘Listen, I read this and it has to be true,’ I’m actually doing it. I’m doing tests to myself so other people don’t have to.

What are the most important things you’ve learned through your experiments on yourself and the people you’ve helped lose weight?

First, you can’t out-exercise your mouth. It doesn’t matter if you lose weight rapidly or you lose weight slow—if you eat wrong after you lose the weight, you’re going to gain it back. Second, your metabolism likely is not broken. And, third, you have to change your relationship with food unless you want to live a life of dieting. For most people, and for me when I was becoming more fat and more sick, food was simply entertainment—that’s all it was. It was no different than watching a movie. We have become a society of one continuous meal that takes breaks to sleep and work. And that’s a problem because in nature, food is rare.

Is the way we eat more important than exercise?

Exercise is very beneficial for a lot of things, but weight loss just happens to not be one of them. Unfortunately, the problem is people are eating too much. People are too socialized with food. We have a set of rules from the late part of the 19th century that were well intentioned because they were addressing a society where 60% of family income went to food and a good meal was not so easy to come by. At that time, they said your plate needs to be divided this way, the pyramid needs to be divided that way, originally as a means of making food inexpensive and available for everyone to address starvation when food was economically scarce. The unintended consequence of inexpensive, ubiquitous food is today it has become a business tool to get us to swallow as much as we can because it’s economically favorable.

How did you make the shift in your approach to food and what advice do you give others?

When I started, it was new and unfamiliar. I had no idea what to eat and it was frustrating. But I’ve expanded my palate to a whole new set of foods and I don’t see it as restrictive at all. What I see as restrictive is doing the same boring thing. The same hot dog at every game. The same burger at every barbecue. There’s really nothing I can’t eat. I just can’t eat it all the time. And I’m not shackled to the very limited food experience found in restaurants. They have three flavors: sugar, salt, fat. You have to change your sense of taste acuity. Unless you wipe away the sugar, salt, and fat dependence, you won’t be able to taste all the other flavors.

How has Withings [now Nokia] helped you and people, like Penn, that you’ve helped to lose weight?

Measuring is what it takes. If you don’t measure your weight everyday, you’re not going to manage it. The people I work with using a Withings scale love getting on it everyday. They are making big progress. And even on days when it blips up occasionally, we laugh about it. When they eat something they aren’t supposed to, they get immediate feedback. When you can measure frequently and effortlessly, you can see the truth. You can be honest about what happened and immediately correct.

Why have you titled your book “Our Broken Plate”?

It examines this idea that we are not broken, but rather that our relationship with food is broken. It’s a history/mystery about how our relationship with food changed as we understood more about it. This changed the way we looked at food, the way we served food, the way we advertised food. And I’ll argue that most of the obesity problem is really tied to this change, along with the fact that we’ve mastered our environment. We have light 365 days a year; there is no time of darkness. We have warmth 365 days a year; there is no time of mild cold stress. And we have over-nutrition 365 days a year; there is no time of calorie scarcity—winter never comes. Nature doesn’t work that way. The question is, what happens when we live all the time without changes in temperature, light, and food availability. I’m not saying that when you suddenly are cold in winter all of the problems go away. I’m saying that there is a series of cascading events that put us in discordance with the world we are evolved in and adapted to.

What is your goal with the book?

What I want to do is touch people’s lives so they can live the most healthfully. My real work is not about diet. It’s about longevity and the healthspan. I haven’t dieted for six years and I’ve stayed a normal weight. That’s freedom. What I want to do is translate what we know about dietary restriction without malnutrition and harness all we know now into the kind of diet that a human can sustain socially, enjoy, and thrive on.

Update June 2018: Cronise talked to us again about his new best-selling book and why he’s all-in for plant-based diets: Ray Cronise on Why Plant-Based Diets Rule