Chivalry is not dead. It’s alive and well in NOHO Park in California where Christopher Burns teaches his subjects how to Fight Like A Knight every Sunday morning. Read on to see how students come to class to learn sword fighting and leave with Lancelot legs, honorable arms, and buns of steel. 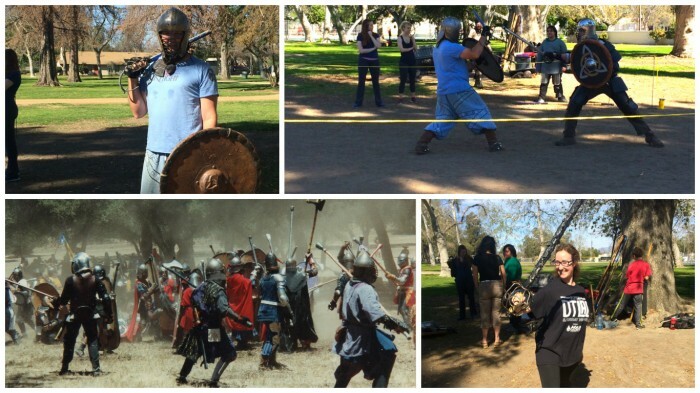 Once upon a time, in a far-off land called Los Angeles…

Gyms and workout tapes can get dull — you’re indoors and there are absolutely no axes and spears involved. But Fight like a Knight fitness program a/k/a FLaK, changes all that. FLaK was created by Christopher Burns, pictured top left, after actors told him they were feeling the burn, in a bad way — fight choreography gigs left actors complaining they were sore and tired after his training sessions. He told Withings, “I began to realize what a workout this can be, especially for the uninitiated, and from there sprang the idea for the class. Originally, FLaK was designed to be a workout class, with a low-impact aerobic component, and a fast-paced sprinting component. And for a while that is how the classes were run. But now, they have evolved into more of a fluid course from warm-up and stretching to sword fighting basics to actual sparring and engagement.”

Of course most folks assume that swordplay mainly works your arms, especially the arm that wields the weapon. However, Chris explained that much of what we once thought we knew about how to properly wield a sword is totally wrong. He says, “If you watch movies or most stage-combat, you will see a lot of arm motion which uses very small muscle groups that do not possess the strength or stamina to sustain a series of killing-force blows. What we teach at FLaK deals a lot with your core, utilizing erectors, abs, and obliques to great effect in delivering powerful sword strikes. Couple that with three-pound sword and a five-pound shield, and your arms (deltoids , triceps, biceps and forearms) get brought into the mix. Then consider that most of what we do is in a lunge or squat (quads and hamstrings) and you get a fairly thorough full-body workout.

Just suiting up for class is a workout

The awesome array of equipment Chris uses in his class is all based on period implements. He uses rattan instead of hardwood to craft bavins which are wooden training swords. The rattan is durable and safe because it won’t shatter or splinter and it’s a lot more affordable than the hard stuff. He also uses polypropylene swords that serve a similar purpose while looking and feeling more like the real thing, as well as a variety of other weapon types made from different materials. Shields in the class are all center mounted, Viking-style shields which Chris prefers. He also uses a good collection of armor including helmets, gorgets (neck protection) gambesons and brigandines (body armor), tassets (hip protection), cuisses and greaves (thigh/knee and shin protection), vambraces and elbow cops (arm protection), pauldrons (shoulder protection), and gauntlets (hand protection). Wearing and moving inside the armor or dawning the chainmail shirt that Chris brings to class guarantees extra fat will be melted away while you spar.

Burns explains, “The second class of every month is a full sparring day where we all get into armor and practice full speed, full contact, un-choreographed combat. Sometimes we do melees where people fight each other in teams, and occasionally have a tournament just for fun.”

Working on his knight moves

When asked how he became a man of the sword and shield, Chris shared, ”I was always fascinated by chivalry and honor, even from a young age when I am sure I had no idea what those words were. “ Years later Chris stumbled upon the Society for Creative Anachronism (aka SCA) around 1990. “I learned that there was an entire organization dedicated to recreating the Middle Ages in a manner totally aligned with my own personal philosophy of social grace, and I dove in headlong. It was in SCA that I began learning how to use a sword, and began a love affair with all manner of medieval weaponry and corresponding martial skill. I trained there with many outstanding swordsmen (and women), honing my skills in practice and tournaments, and consequently was knighted in 1995 a week before my wedding.” Now this knight fulfills his destiny as a teacher and spends two hours training would-be squires and sword maidens every weekend in the park.

So, are you ready to get your Game of Thrones on? Find out more at fightlikeaknight.com or facebook.com/FightLikeAKnight