In 1995, actress Elizabeth Berkley brought the art of pole dancing into the mainstream media in the cult classic Showgirls. Pole dancing is not quite as scandalous as it was then, but the strength required to execute a pole dance move would shock your socks off — and that’s good, because the less you wear for this sport the better. Read on to find out why women all over the world are choosing the pole as their personal trainer. 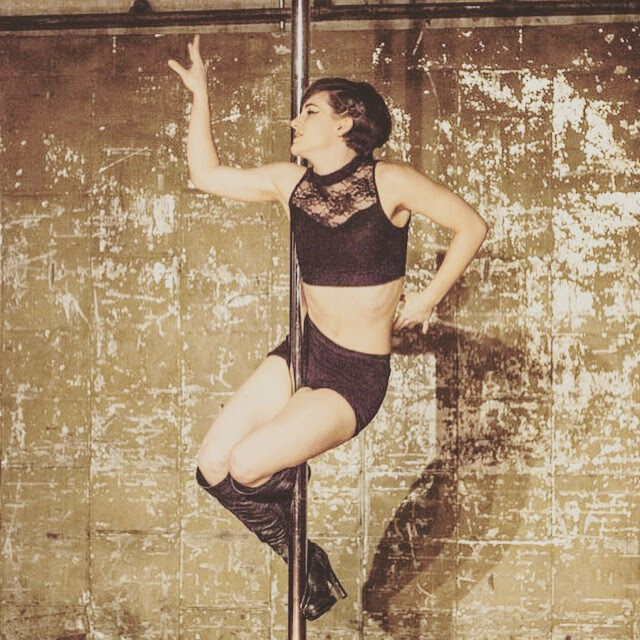 Goddess Fitness Dance in Sherman Oaks, California is proud to be “the original pole dance fitness studio.” Their mission is to provide a welcoming environment for you to unleash your inner goddess, all while getting in the best shape of your life. Excited to give it a try, I signed up for a Broadway-inspired burlesque pole dancing class on their schedule called Broadway Pole-esque.

As I entered the studio, I felt like I had walked onto the set of Moulin Rouge. There were pink walls and red curtains draped everywhere. A mirror ball flanked by two chandeliers lit up the dance floor, while two hot pink fuzzy covered ladders leading nowhere ran up the back wall. Rococo-esque accessories adorned a coffee table in front of a luxurious couch, and most importantly, eight shiny poles graced the floor. If Strawberry Shortcake owned a brothel, it would look like this. 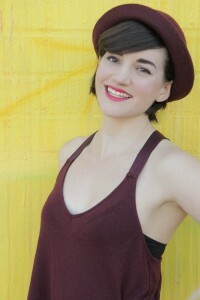 I was feeling a little shy about the sensual component of this workout, but the instructor, Alana Chauvront, picutred, welcomed me and immediately put me at ease with her warm demeanor and playful sense of humor. The pole I selected had been named Raphael by the studio owners. Alana told me I was welcome to rename him, but I decided to honor his original christening.

As a 30-year dance veteran, I assumed I would be able to do the Broadway Pole-esque class with ease, but I could not have been more wrong. After stretching out, we placed a mat in front of the pole to do some body sculpting. One exercise involved lying down while holding onto the pole behind our heads, slowly raising and lowering our extended legs to strengthen our lower abdomen muscles. It was awesome in a grueling sort of way.

Then we got on our feet and learned a combination using a chair and a pole. I was killing it with the chair moves, but just when I was starting to feel confident, we headed to the pole. I quickly figured out how incredibly strong you have to be to hold yourself up on the pole for even a second. Forget about doing actual tricks, twirling, and posing, all while looking graceful and sexy.

Alana and some of the other students made it look so effortless, despite each move requiring great arm and wrist stability, core strength, balance, and flexibility. I realize now that I made several rookie mistakes. These are some of the greatest challenges I faced as a first timer:

SWEATY PALMS: My hands were so slippery that I could barely maintain my grip. The teacher eventually noticed and offered me hand gel designed to make your hands more sticky and less sweaty.

WARDROBE MALFUNCTION: I made the mistake of wearing too many clothes. You want to leave your legs and arms as bare as possible, because you need direct skin-to-pole action to help you stay connected.

HUG OF DOOM: I found out the hard way that holding onto the pole too tightly increases your rotation speed. Clinging to the pole for dear life sent me into a top speed death spiral. If I had put some space between the pole and my upper body, I could have slowed down my speed and softened my eventual wipeout.

PRIVATE EYES: I foolishly wore my glasses instead of my contacts. I should have found a moment to rip them off and let down my hair, sexy-librarian style, but instead my glasses kept falling off or bumping the pole during transitions between moves.

WEAK LINKS: The only parts of my body that can be described as tiny are my wrists, which did not serve me well in this sport. My wrists were often too weak to stabilize and support my body mid-twist.

Even with all of my personal obstacles, I managed to have a blast and get a tremendous cardio and body-shaping workout. I thanked Raphael for being a supportive partner during my maiden pole voyage. As we cooled down, Alana made me and all the students feel wonderful about how hard we worked.

After taking the class, I finally understand the testimonials in the popular film, Why I Dance, that went viral on YouTube. The pole dancers in the film explain why they love pole dancing, saying, “Because I love my body,” and “Because it’s a killer workout.” One of the co-producers of the film, Amy Main, explained to Shape Magazine that “Pole dancing accomplishes so many things at once. Not only is it an incredible core and upper-body strength builder, it is also sexually liberating, emotionally cathartic, and a form of expression, and an exploration of self.”