Actor Luke Adams Plays A Big Part In His Success

Luke Adams, a world-famous karaoke host, big-band singer, and actor whose voice has been featured on TV’s “Family Guy” and “The Cleveland Show,” recently took charge of his health by amping up his exercise and losing 30 pounds in three months. Read on to see how Luke makes getting healthy pleasurable by doing the things that make him happy: Eating what’s delicious, working out in fun ways, and geeking out with the tech gadgets he loves. 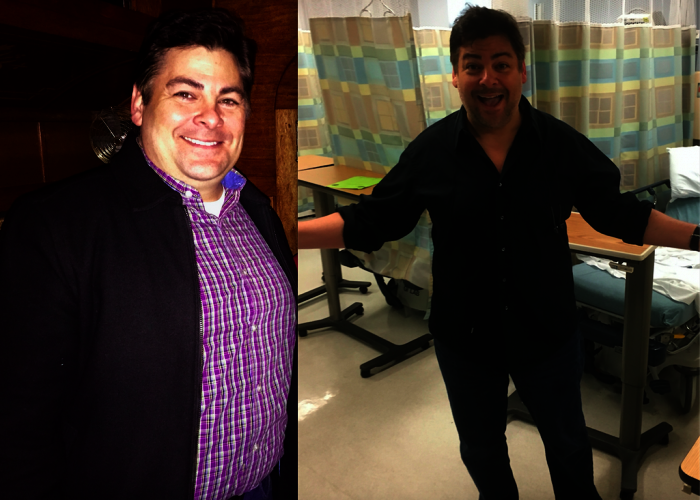 How one performer set the stage for his success

Like many of us, Luke Adams, pictured, found that his weight started creeping up as he got older. The multi-talented 49-year-old told Withings he just wasn’t paying attention, and before he knew it, he was carrying 270 pounds on his 5’11’’ frame. “I love food, and I’m from the south, where it’s all about food,” the Dallas-born performer said.
Age wasn’t the only contributing factor to his weight issues. For the last 25 years, Adams has worked as a karaoke host and DJ at renowned clubs such as The Cat’s Meow on Bourbon Street, Daddy Rock in Cancun, and now The Café Brass Monkey in Los Angeles, often starting his workdays late at night and not ending until the wee hours of the morning. When he’d get off work, he’d hang out with friends to wind down. And grabbing a bite was his way to socialize. “After work, it would often be, ‘So where do you want to go eat?’” he confided. Adams now realizes the habit of filling up before going to sleep led to packing on pounds. “Now, I don’t do that. I’m starting work at 9 p.m. now. I have my dinner before I go to work, and when people say, ‘Hey, let’s go have a bite’ — I don’t do that. I have my dinner early, and after work, I go right to bed.”
Adams was an early Withings scale adopter because, as he says, “I’m kind of a tech guy. I liked the idea of being able to monitor my weight, and I like how it’s all connected.” Adams tells us that he bought the scale for the cool factor. “It came out at the same time as the Apple HealthKit. I got the watch, and I think I saw the Withings scale for the first time on the Apple website. I bought mine at the Apple store.” At first, Adams said he might go several weeks without weighing. But things changed two years ago when he found out he had colon cancer.
“I attribute Obamacare with saving my life. As a performer, I had to pay privately for health insurance, so I just didn’t have it for about 10 years. If they hadn’t passed this bill requiring it, I wouldn’t have gotten a colonoscopy.” When he went in for his first check-up in a decade, the doc found that his iron levels were surprisingly low and ordered a battery of tests. The colonoscopy revealed bleeding, which allowed them to catch the cancer early. “I was stage one, and there was no spreading, nothing in the lymph nodes.” They removed about a third of his colon, and no radiation or chemo was required. Luke is currently cancer-free, and more serious about his health than he’s ever been.
Now, in addition to tracking his nutrition and calories with the MyFitnessPal app, and tracking his daily steps, Adams faithfully gets on the Withings scale in the morning. “Before, I was weighing whenever I wanted to. Now, I weigh every day. When you see a good result, it motivates you, gets you back on it. Before, I might go several weeks without weighing.” But now, Adams gets a rush from the feedback of his health graphs when things are good, and a nudge to do better when they temporarily go south. “The scale is like my punishment or my reward.”

Taking exercise one step at a time

When it comes to health, as with his career, Adams tells us he’ll commit to doing things that he likes. If he’s bored, forget about long-term commitment. “If dieting is about eating things you don’t like, you’re not going to stick with it.” To ensure that he’ll make healthy choices, Adams chose to move to a section of LA called Koreatown. “Dallas is a car town. I never walked anywhere. Where I live now, I realize that there are many places I need and want to go that are within walking distance.”
He chose to live near a subway stop that can take him to nearby Santa Monica where he walks around the pier to make exercise enjoyable. And he chooses to take the long staircases to ground level. As he clocks his daily steps, it’s the little choices that make a big difference, he says. “I think, ‘OK, am I going to let a machine carry me up those stairs or am I going to walk?’”
“I don’t like to go to the gym. It’s boring to me. I have to find things that keep me interested. I used to drive to the grocery store. I realized the store is only about a mile or so away. I grab my bags, go, and then I’ve walked and run an errand. I don’t want to have to get on the treadmill for 40 minutes and be bored.”
It’s the same with food, he tells us. To stay with a healthy eating plan, it has to work for you. If you don’t want to eat your food, you won’t stay with it and lose the weight. “It’s about finding something that can fill you up, that you really like, that gets rid of the food craving. It can be hard to find something you really want to eat if you’re a finicky eater. I’ll make some brown rice and tuna fish and corn, with no fat or cheese.”
Having lost 30 pounds, Adams has more energy. “I got my bike out of storage. It’s easier to walk now. “I get water delivered. As I was changing it one day, I realized in terms of weight, I had been carrying one of those around. In high school, I weighed around 180. My weight-loss goal now is to get down to about 210. It’s a very realistic goal.”
And he’s better able to move through space with less weight on his frame. “Now I can actually do some jogging. I’m on my feet over 6 hours at a time. My feet don’t hurt as much at the end of the night.” Less pain and better health means more energy for Adams to do things like sing with composer Ron Jones’s big band. Jones, the former composer for Family Guy and Star Trek: The Next Generation often invites Adams to sit in and croon some tunes. “I met him and (Family Guy Creator) Seth MacFarlane at the Brass Monkey. Sometimes Seth and I will sing with Ron’s band on the same night, and sometimes we do duets.”
It’s this joy in music that has kept Adams in his career for nearly three decades. “I get to sing every night, and meet good, fun people, like all the writers and voice-actors for Family Guy. I love music. I feel lucky that I get to have a job that lets me be around it.” He tells us that he records voice-overs in his home studio, and occasionally does musicals in regional theater, but hosting karaoke is his real love.
For now, Adams is focused on enjoying his career and getting healthy. “Next on my list is the Withings blood pressure cuff. I want to knock wood, but for now I’m pretty healthy. My blood pressure is great, but I want to monitor it. I want to add that to my morning routine.” Adams told us that he now has a hernia, and if he can lose 20 more pounds, the surgery can be done laparoscopically. “That’s good motivation.”
We asked what advice Adams has for people who want to take control of their weight and their heath, and he shared this: “I feel like getting in shape, taking better care of yourself is something anyone can do. But you’ve got to make it interesting. Getting on the scale every morning it’s like a score for a game, like a video game or sports game. With the scale, it’s more of a challenge and less of a chore. When I see the line has gone down on the graph, I get a surge… Just like if I got a good score in a game. And when you see that line go up in the morning, it’s like, ‘Oh, man, I have to do better. It’s all there: My actions, my choices, what I eat that day, how much I walk. It’s motivating, and it keeps me honest.”
And finally, since we don’t get to chat with a karaoke expert frequently, and we’re really into tools for success, we asked for his protips for choosing a song. We asked if there’s there a hard and fast Bonnie Tyler rule… or is Journey a no no?
Adams weighed in this advice: “When it comes to karaoke, don’t worry so much what the crowd will like. Sing a song you love. One that makes you happy when you sing it. The crowd will respond to your happiness.”
***
Thanks so much to Luke for his time! You can follow him on Twitter @luketadams.