Why the HoBOOken 5k Is a Scary Good Race

Our content director is running a Halloween race this October just outside New York City. See why it’s her favorite, and hear from the race director to find out what it takes to put a massive event like this together.

Have you heard of the HoBOOken 5k? No? Now, let me be clear before going any further: I am very biased towards this race. I’ve run it for the past few years, and last year I did it with my whole family for the first time. Scheduled every year just before Halloween in Hoboken, New Jersey, it has about 1200 participants, it’s filled with mostly locals, and I love it with the fire of a thousand suns. Here’s why I personally love it, followed by an interview with the race’s director.

The HoBOOken includes a 1-mile race for kids called “Scary Scurry” and the 5k, which is adults and a few adventurous kids. And for both, yes, most everyone runs in costumes. While running makes me feel great and energized after the fact, I think running any distance beyond half a block is exceedingly boring. When I run, I just think I could be doing so many more interesting things. Or I think: why not just walk? Why all this work? Personally, the motivation is not there. However, at the HoBOOken 5k, I’m totally entertained for 3.1 miles as my fellow runners let their freak flags fly. I remember seeing a group of young people in torn bloody white T-shirts that said “VICTIM” and then, a minute later, seeing a group of people dressed as sharks running after them. Or you find you’re with a group of pharaohs from ancient Egypt and then you’re trying to keep pace with Pac-Man and his ghosts. From the costumes that are made with love from cardboard to the really professional ones, there’s never a dull moment to be a part of this speedy parade. Added bonus: the fun of costumes inspired my kids. When I suggested we all train and run, there’s was no interest. But when they saw Mom in a cape, surrounded by so much silliness, they decided they wanted in.

2. It includes stunning world-class views.
Much of the run is along the banks of the Hudson River, so if costumes aren’t enough, seeing the undulating water and the beauty of whole west side of Manhattan spread before you is amazing, and the breezes from the river cool you down. 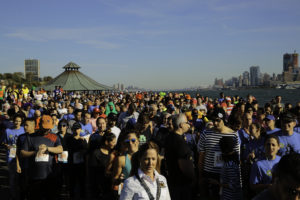 3. It has food & stuff.
After you cross the finish line, there’s fresh fruit and snacks, coupons and swag. I’m so appreciative of that post-race banana or granola bar that I will pledge allegiance to any and all businesses that contribute. Last year I got a new toothbrush and some colorful pens. After my post-race high, I get prizes? Yes! I’m a total overgrown child and I love that.

4. It also has chipped bibs & official results.
I’m slow. Every 5-kilometer race is a challenge for me. I’m super proud that I’ve always run and not walked in a race. And because I started running so late in life, my PRs (personal records) are easily beaten. So I love wearing a chipped bib—where a computer chip is embedded in your number to provide precise times—because afterwards I can see where I landed and compare myself to other women in my age group. Last year, in the 70+ category, Beverly Hans, a 77-year-old woman from Hoboken, NJ, ran it in 37:39.27, and in a few decades, I hope to be giving my peers in that age group a run for the title.

5. The money raised goes to a good cause.
Sometimes I can’t be bothered to be fit. Perhaps it’s my personal problem, but beyond the boredom of a long run, I’ve got a job and a family, so it also seems kind of self-indulgent and just plain hard to take time from my life to concentrate on only myself. A race on the calendar helps me to have a reason to get in shape, and the worthy cause, raising money for a local homeless shelter, makes me feel that beating my record, firming up my calves, or lowering my resting heart rate isn’t trivial.
Speaking of money, Karin Romans has been working in fundraising for 15 years, and is currently director of development at a national nonprofit called Schools That Can. But in her spare time, Romans has taken on the awesome task of volunteering as race director for the HoBOOken 5k. A lot goes into planning a successful race in a highly populated urban area, and Romans was kind enough to take the time to answer a few of my burning questions about the 8th edition of this very unique annual event.

Q: How long has the HoBOOken 5k been going, and how has it grown?
Karin Romans: The race was launched by the Hoboken Elysianettes in 2010. In 2015, the Elysianettes passed on the race to a group of five volunteers, and since then it’s been managed by the Hoboken Shelter volunteers. My husband and I have been involved since 2015 and have organized the race each year. It’s grown in both size and the amount that’s given to the Shelter. In 2015, we crested giving $50,000 back to the Shelter for the first time and this year, we’re hoping to give $70,000 back. Last year we raised $65,000 to support Shelter programs. Today we have over 1,500 runners and about 2,000 people out on the Pier. Last year, thanks to the involvement of Little Hoboken, we grew our one-mile kids’ race, called the Scary Scurry Run, from 100 kids to nearly 300. The race is fast becoming a Hoboken tradition with great support from Hoboken businesses, residents and community groups. We’ve also really grown our group of volunteers. What started nearly five years ago as five volunteers to become a group of nearly 15–20 dedicated individuals who donate their time and expertise from May through November each year to see that this event is successful.
Q: What does the money go to?
All the money goes to the Hoboken Shelter, which helps the homeless in our community. The Hoboken Shelter was founded just over 35 years ago to help get people back on their feet.  Today, they provide 50 people shelter nightly, provide over 500 meals a day and provide 1,000 showers to people weekly. In addition to food and shelter, they provide supportive services including case management, counseling, job and life skills training, creative arts workshops, emergency homelessness prevention grants, & permanent supportive housing solutions. In 2017, the shelter helped 107 move from the shelter into their own homes, ending homelessness in Hoboken by a rate of two people per week. The Hoboken Shelter is just over a million dollar organization that works with a lean staff to help the homeless. Their efforts are supplemented by the volunteers who help organize this race and donate their time, enabling us to give 100% of proceeds back after expenses. The funds support programming and operating expenses at the Shelter.
Q: Do you run? If so, do you wear a costume?
I do run! I’ve run a number of race and triathlons for fun. I got involved because I was a fundraising volunteer at the shelter. I walked into the shelter nine years ago and mentioned casually to the Executive Director that I worked in fundraising and was looking for a local organization to get involved with… and we’ve not stopped working together since. I helped organize the shelter’s 30th gala, but really found a niche with the 5k. Since 2014, I’ve been a development consultant with the shelter fort a few hours per month, mostly focused on all their fundraising operations, so this race is a labor of love. I had run the race several times with my husband, as Wonder Woman and Superman, and then when the opportunity came up to help organize the race, it seemed like a great fit. I love the shelter’s mission to move people from the streets to the shelter to a home of their own. The race seemed like a great fit for a fundraiser-slash-runner.
Q: Any favorite costumes you’ve witnessed over the years?
Hmmm, probably the Scooby Doo gang? And I was overwhelmingly impressed last year by a guy who wore a Joker costume, likely made of polyester, who still managed to come in second in his age group! I’m probably the worst person to ask this, since I tend not to notice anything on race day, as there are a million things coming at you at once. It’s not until afterward, looking through photos, that I get to really appreciate the costumes.
Q: Do you have any protips for someone participating in this year’s 5k?
Yes, contact Fleet Feet in Hoboken! They are great supporters of the race and they also have a great beginners’ running program. And you can always view the “training” section on our website, which was put together by one of our team members who helped to redesign the site and develop a project management plan for us.
Thanks so much to Romans for her time. If you want to support the race, well, I do have a team fundraising page—or, if you are in the New York City area, join us! Register here and get your heart pumping—and your costume ready.
Photos thanks to Craig Wallace Dale photography