There are now plenty of health applications for all formats of mobile phones and tablets. From self-tracking apps to electronic health records to applications that remind you to take your medication. Today, we’ll shed some light on a specific category of apps: applications for self-diagnosis.

Perhaps one of the most ambitious applications is NHS Direct, released by the British National Health Service (NHS) in May 2011 for iPhone and Android devices. The app aims to reduce the load on the British health system by enabling its users to check their symptoms and get advice on how to relieve them, often with no need to consult a physician or a hospital. The application unfortunately is only available in the UK Apple and Android stores. 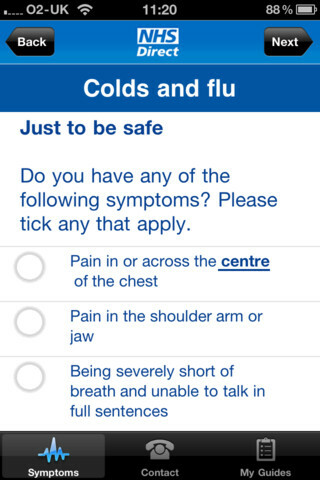 Among self-diagnosis apps we can mention Symptom Navigator for iPhone, that also includes an illustrated medical encyclopedia, Common Symptom Guide for Android that focuses more on day-to-day health concerns for both adults and children and WebMD for iOS devices and Android that provides a mobile version of the services available on the website, including self-diagnosis tools.

Some other applications allow users to check if they are affected by a specific medical condition. For example, a few apps exist that enable you to test if you are colorblind, like the aptly named “Color Blind Test” for iOS devices. iExam, also for iOS devices, goes a bit further and enables you to check several aspects of your vision as well as give you information about eye health in general and help you locate the nearest eye health specialist physicians. Likewise, the British Action on Hearing Loss institute has released an app named Hearing Check that allows you to determine if you suffer from hearing loss and to what degree.

Other applications will take care of your skin: Skin Scan for iPhone and SpotMole for Android work in the same way: using your phone’s camera, you can take a picture of a skin mole and the app’s image analysis software will determine the level of risk of abnormal development, that is to say the chances of developing a melanoma.

The future looks bright for self-diagnosis applications: recently South Korean researchers have devised a way to turn smartphone touch screens into “biomolecule detection platforms”. They believe that modern touch screens are sensitive enough that, with the correct calibration, they would be able to differentiate between bacteria-free saliva and the saliva of a sick person. The only drawback of course is that you would have to spit on your phone…

Do you use some self-diagnosis apps yourself? How much trust do you put into their advice?