Is Quitting Smoking Bad For Your Health?

A new study by Withings and Kantar Health involving 5,587 of our users sheds light on short-term obstacles smokers face when they’re trying to quit, as well as the long-term benefits. Read on to learn more about our findings.

The data behind stress, sleep, and weight gain

In addition to dealing with withdrawal symptoms and cravings for nicotine, many smokers trying to quit suddenly find themselves without their major source of stress relief. Instead of reaching for a cigarette, they must find alternative ways to handle stress. This is a very difficult challenge to overcome, because when stress hits, it’s much easier to turn to what has worked (in this case, smoking) than to try something new.

The chart below plots how frequently our surveyed users feel stressed, by smoking category. It’s plain to see that those trying to quit are the most stressed: only 17% of them never feel stressed, compared to 24% for smokers and 40% for nonsmokers.

Those trying to quit smoking also appear to have slightly less restful sleep, likely as another side effect of nicotine withdrawal. Our data shows that 71% of those trying to quit do not feel well rested in the morning, compared to 64% for smokers and 61% for nonsmokers. 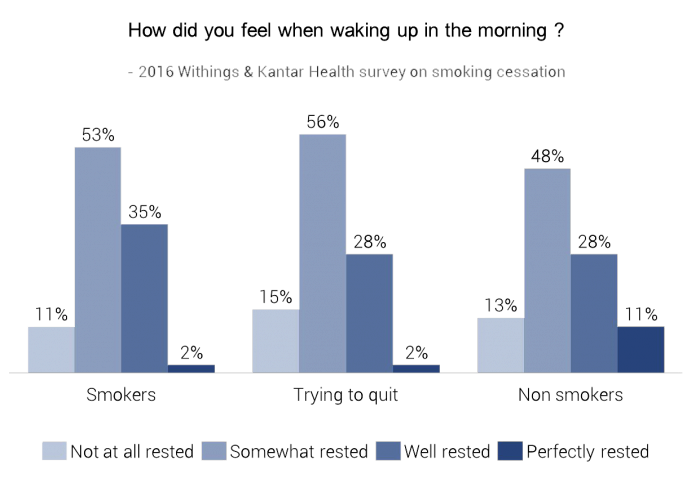 Weight gain is another unwanted side effect of smoking cessation. Because nicotine suppresses appetite, some people actually begin smoking as a means of weight regulation. On the other hand, nicotine withdrawal can cause a surge in appetite, which some cite as a reason not to attempt to quit smoking. Additionally, without the ability to smoke to alleviate stress, many people turn to food as a substitute. We analyzed our user base to see if weight gain was a valid concern for those trying to quit smoking, versus smokers and nonsmokers. 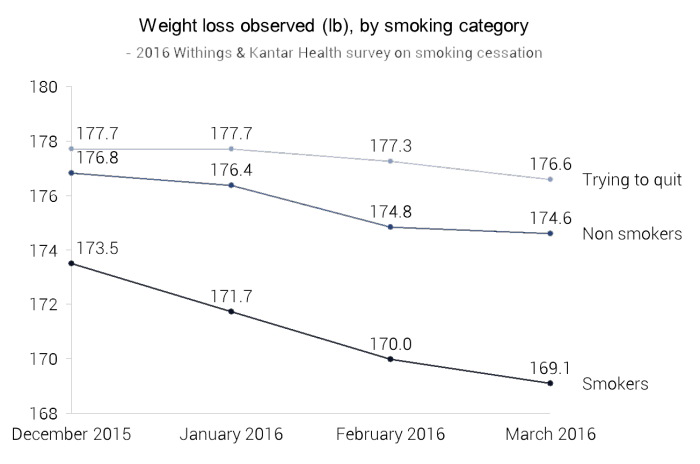 We found that among users who regularly track their weight and activity, all groups, including those trying to quit smoking, lost weight over a 4-month period. While  those trying to quit smoking lost an average of only 1.1 lb, compared to 2.2 lb for non-smokers and 4.4 lb for smokers, they were still successful in losing weight. While the conventional belief is that those trying to quit smoking should expect weight gain, our data reveals that weight loss is still possible during this time, even though it may be more difficult. Such a finding should be reassuring to current smokers that are afraid of gaining weight when they give up cigarettes. Keep in mind, however, that this data was taken only for those regularly tracking weight and activity, so it is likely that such tracking behaviors help smokers trying to quit to maintain or lose weight despite the challenges they face.

The first ever analog watch with an ECG, activity and sleep tracking, and up to 12 months battery life on your wrist.
Discover

By now, the dangers of smoking have been well-documented. In addition to causing cancer, cardiovascular disease, and emphysema, smoking is especially harmful for pregnant women. With these known long-term effects, we examined whether health metrics collected from our users would reflect the negative effects of smoking in more subtle ways. 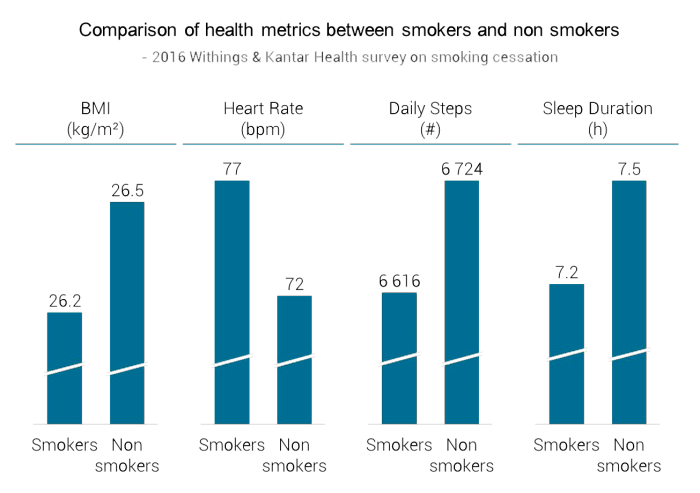 This chart compares six-month average values of various health metrics of smokers to nonsmokers. Smokers appear to have a higher heart rate, walk fewer steps per day, and sleep less than non smokers. However, they do  have a lower BMI, which is in line with our previous observations.

Sleeping for longer, walking more, and having better cardiovascular health have an enormous positive impact on overall long-term health. It is thus unsurprising that smokers live an average of 10 years less than nonsmokers.  But those who currently smoke are not doomed. Research shows that after a year of not smoking the risk for heart disease is cut in half, and after 5-15 years, heart disease risk is the same as that of nonsmokers.

This study was conducted by Withings, based on data from a panel of 5,587 Withings users. Among them 12% were smokers, and one third of these smokers were trying to quit. We considered a given user as a smoker if he smoked at least 10 cigarettes a day.

We engaged our users with surveys taken through our Health Mate app. We worked with healthcare specialists from Kantar Health to analyze the results.