Brandon McKinney started biking to work to shave time off of his daily commute. Five years later, he’s nearly 20 pounds lighter and pumped about finding his passion: competitive cycling. Read on to discover how Brandon rode towards a healthier life. 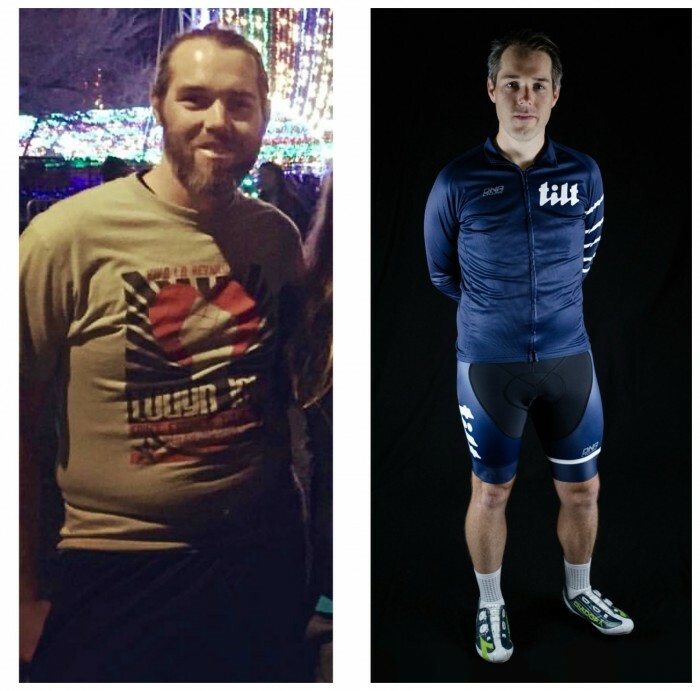 In 2010 at the age of 33, Brandon McKinney, pictured, moved from Oklahoma to Austin, Texas and ditched his car. After a year of riding the bus he took up cycling to cut his commuting time in half. Cycling to work burned calories and improved Brandon’s overall fitness, and in the two years that followed, cycling became his hobby of choice. Eventually his passion grew, and he ventured into competitive cycling. Still, he tells us, “Cycling alone had me at a plateau.”
Brandon never thought he had a weight problem. Throughout high school he was active with sports, and yes, active with music via marching in the drum line, which Brandon says, “will make you more fit than people realize.” But after a youth spent filling up on extra-curricular activities, he made a conscious shift to decrease his commitments in college. On top of classes Brandon decided to work. “I got an office job and became fairly sedentary. Combine that with typical college eating habits, and I gained a fair amount of weight. I was 195 at my heaviest point. Mind you, I weighed 135 when I was a junior in high school and playing soccer.”

According to a graph Brandon posted on Instagram, at the beginning of 2016 he dropped from 178 pounds to 160 pounds in just three months. Cycling and clean eating were two important factors in his rapid weight loss.
Immersing himself in cycling culture taught Brandon healthful ways to live and inspired him to make better choices with regards to nutrition. “Credit for getting me started on this type of eating would have to go to my current TILT Racing teammate Ben Sanders who got started with direction from his amazing coach Gray Skinner. I observed Ben’s habits when we would ride and race together and adopted many of them for myself.”
The third key element to Brandon’s success is recording his weight daily using a Withings scale. Brandon tells us, “The [recording] helps in a few subtle, but very helpful ways. First, it makes it easy. We all know if something’s not easy, we’re not likely to do it. Secondly, it keeps a history that’s available to me via my iPhone all the time. Withings went one step further than they had to, though. The raw data is helpful, but most people tend to have days where they swing up or down, or little micro-trends in their data that would potentially be discouraging once you have enough data that the real trend gets lost in the noise. Checking in and weighing often is a good thing, but with the trend line in the Withings app that does some smoothing of the data, I can now see the actual trend of my weight, and verify that I am still on track.”

When it comes to nutrition for weight loss, Brandon is quick to point out that he doesn’t believe in diets. “It’s a lifestyle change,” he stresses. “It’s never a quick, easy answer, but tons of hard work behind the scenes. My weight loss appears quick, but it took me several years to achieve. Persistence pays. I made a conscious decision to permanently alter my eating habits. It has taken discipline and, at times, creativity to stick to it in our current world of easy-to-obtain bad foods.”

“Don’t be afraid to be uncomfortable. Getting out of your comfort zone is where you grow and make gains.” — Brandon McKinney

Brandon compares his old habits to those of many Americans: protein-heavy and laden with processed food. He tells us that he “never ate a salad in his entire life until he moved to Austin,” but now most of his meals feature leafy greens along with fibrous, nutrient-rich foods like carrots, beets, and broccoli and lean proteins like chicken, turkey, and fish. He goes easy on sauces or dressings, amping up flavor with curries, vinegars, and hot sauces. “The hotter, the better,” he raves. “The point here is to make everything in the meal meaningful for nutrients, water, or fiber. Your body is much more efficient if you’re not stuffing it with filler ingredients that don’t ultimately benefit you.”
Despite a mostly clean diet, Brandon indulges in one standard American treat: a soda a day. “I limit myself to one, typically a Dr. Pepper Ten, so I’m still not consuming many empty calories. I’m not a fan of plain water, so I do use liquid water flavors like Mio and Crystal Light, which encourage me to drink more. Most people walk around dehydrated most of the time, and it’s amazing how much water intake plays a part in nutrition and overall health.”

Brandon believes that losing weight has saved him thousands of dollars in bike upgrades. “In the cycling world, weight is almost everything,” the cyclist explains. “The sport is full of a culture that desires to have the lightest bikes and components, even clothing and sunglasses. I know plenty of racers that count every gram that goes into their bikes. There’s a ton of math I could get into in this regard. It all really comes down to power, measured in watts, in cycling. The more watts that you can eke out of your legs, the faster you go. On my Instagram post, I noted that I made approximately $5,000 worth of bike upgrades by losing weight.”
When Brandon began cycling to work, he never thought it would turn into one of his greatest passions. Now that he’s hooked, he wants to inspire others to find their own inspiration to lead a happier, healthier life. “Everyone has their own unique passions. If you haven’t identified at least one, do it and ideally, make it active. Once you find your passion, go for it… Don’t be afraid to be uncomfortable. Getting out of your comfort zone is where you grow and make gains.”
***
Many thanks to Brandon for sharing his story.
Photo credit for header and Brandon’s “after” shot: @truemarmalade