Penn Jillette on The Halloween Horror of Gluttony

Read on to enjoy another original article from Penn Jillette.

On Halloween in 2014, our magician/best-selling author friend Penn Jillette landed in the hospital with sky-high blood pressure. It was a wake-up call, and soon after, he took action. He started tracking his weight, starting eating a metric ton of veg, and lost over 100 pounds. He got his blood pressure under control, feels miles better, and if you want to know more, we have lots of articles that tell his story.
As we approach the 5th anniversary of his Halloween health scare, we asked for his take on the holiday, and how he’ll celebrate this year. And as an extra-special bonus, at the end of the post we have been provided with an excellent and rare picture of Penn trying to score during a very swinging 60’s Halloween…

It’s October, so let’s talk Halloween. Halloween started as a religious holiday (you can tell because it’s about dead people walking around), but that part is gone. I have bled buttassnaked on stage, so I feel about Halloween like real drunks feel about New Year’s Eve—it’s for the amateurs. I’ve watched Halloween change from a horror holiday and a children’s holiday to a sex holiday. Children still go trick-or-treating dressed up scary, but if you search for Halloween costumes, you find everything has the word “sexy” in front of it: “Sexy Nurse,” “Sexy Zombie,” “Sexy Cheerleader,” “Sexy Firefighter.” The only one you don’t see is “Sexy Trump Supporter” or “Sexy Trump Impeacher.” There is still a limit to the horror the world can stomach. My children have gotten to be teenagers and moved from Marvel to anime, but they still like candy. Halloween for me is also just gluttony.
I am a glutton. I’ve come to accept that. I’m not a gourmet. I don’t care very much what I eat. Changing to vegan for my health and then adding the ethical vegan angle changed what I ate, and when I ate and how often I ate, but not how much. Once I start eating, I do not stop. I’m a pig. A pig who doesn’t eat swine or bovine or chicken, or even oysters but a pig all the same. I can not eat until suppertime but once that first calorie goes in I don’t stop until I have to stop. There is no willpower. I can not eat, but I can’t eat just a little.
My long-suffering Withings scale has me up 20 pounds from where I like and about 30 pounds from where I’d love to be and 40 pounds from where my nut longevity buddies would want me so they can continue to yell at me when we’re all 112 years old doing planks. My first Halloween after losing 110 pounds was what I was then calling “rare and appropriate.” Because candy was appropriate on Halloween, I figured: why not pizza? I might have also had steak. Way back then (4 years ago), I still found that appetizing. Some things have changed—I now find all meat and dairy repulsive (food desires are all habit). If you hide eggs or a little milk in a cookie I will eat it, but a bloody steak, well, it’s even hard to watch someone else eat that.
I have changed most of what I desire, but my favorite candy is still NECCO wafers. Yes, that is a roll of NECCOs in my pocket, and I’m also happy to see you. I love that NECCO is an acronym. Some say it stands for New England Confectionery Company, but I know it really stands for Self-Contained Underwater Breathing Apparatus. NECCO won’t completely reassure vegans that they use no animal-derived gelatin, but I bet they do. If you know for sure that NECCOs aren’t vegan, promise me you won’t write in and tell me (Susie, keep that from me). Halloween, like every holiday for me, is a time of gluttony, and I’ll be gorging on NECCO wafers, dark chocolate, Oreos, and, like every day — peanut butter.
You’ll be able to recognize me because I’ll be wearing my expandable “Sexy Withings Blogger” costume.
And yeah, after Halloween I’ll get on the scale, off the NECCOs, and try to get back to the same old me—that is actually a very different me than half a decade ago.
***
Special bonus! The Penn-as-a-pumpkin-on-Halloween photo the world needs… 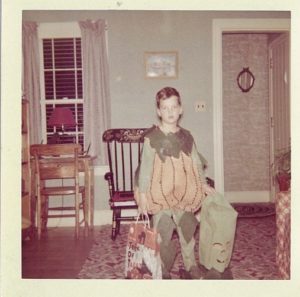