Withings conducted a study on sleep patterns from users of its sleep products (Withings Pulse and Withings Aura) in 10 countries. Discover the main findings of this study and see how your sleep levels compare to our panel.

Sleep plays a vital role in our daily routines. In fact, we often hear that observing a regular sleep schedule is key to helping people get into and maintain a good shape. Despite the importance of sleep, exact sleep needs may be different from one person to next, in the same way that the same person has different sleep needs at different times of the year.

7 hours of sleep on average per night

The first observation we can make is the hour difference between the 8 hours of recommended sleep and the mere 7 hours that most people are getting. The study population sleeps an average 6 hours and 50 minutes on weekdays and 7 hours and 25 minutes on weekends. Saturday nights show the longest sleep duration with an average of 7 hours and 30 minutes. 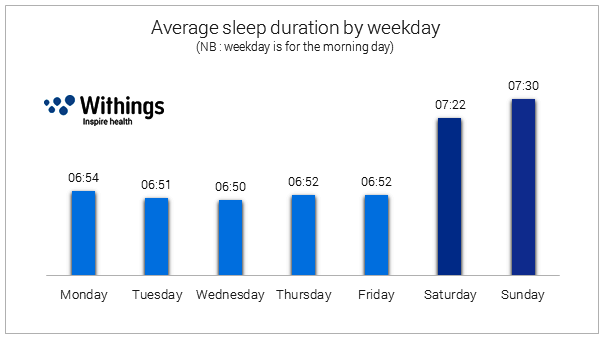 Jim Horne, director of the Sleep Research Centre of Loughborough University in England, said in an interview that this difference can be attributed to the fact that women are likely to multitask more frequently throughout the day, causing them to use more of their brain power than men. Thus by the end of the day women are more tired than men and will fall asleep earlier.

Get an in-depth look at your nights by tracking sleep cycles, heart rate, snoring, and breathing disturbances.
Learn More

Sleep needs decrease when we get older

Studying sleep patterns across different age populations allows us to determine the evolution of sleep patterns. The study revealed that bedtimes become earlier as age increases: 20–24 year olds  go to sleep on average at 12:20 a.m. while people over 65 go to bed at 11:23 p.m., nearly 1 hour earlier.

The average wake-up time moves in the same direction, except that it increases again once people reach the age of 60. One possible explanation for this is the effects of retirement and the end of needing to adhere to strict sleep schedules. Younger people wake up at 8:17 a.m. while the older population gets up at 7:25 a.m. The 55–59 age class rise the earliest at 7:08 a.m.

The biggest sleepers are younger with an average of 7 hours and 26 minutes of sleep per night while 45–59 years old sleep the least (7 hours and two minutes on average).

During the year, the length of days related to the duration of sunshine is changing: from the summer solstice (longest day) in June to the winter solstice (longest night) in December, the nights become longer and longer. The human body is sensitive to sunlight, encouraging us to follow the rhythm of the sun. From the study we observed that people sleep more from June to December (as the days get shorter) and sleep less from December to June (as the days get longer).

Thus, we see that sleep patterns vary depending on the individual (age, gender) but also on the environment (days of the week, months of the year). In a future article, we will explore the differences in sleep patterns based on location and culture.

This study was conducted with a panel of users from Withings sleep products (Pulse and Aura) including more than 10,000 people homogeneously split between countries data. Withings guarantees the confidentiality of personal data and protects the privacy of its users. Thus, all data used for this study was anonymized and aggregated.