Jeanne Simpson Works Out The Actor’s Life For Us

Actress Jeanne Simpson is not the stereotypical Hollywood starlet. In between commercials and roles on Mad Men, Parks and Recreation, and more, she is a wife, mother, dancer, and blogger for Withings. While she reports on wacky fitness fads for this blog, her acting jobs entail just as much craziness. Read on for a behind-the-scenes look at what it’s really like to be an actress. 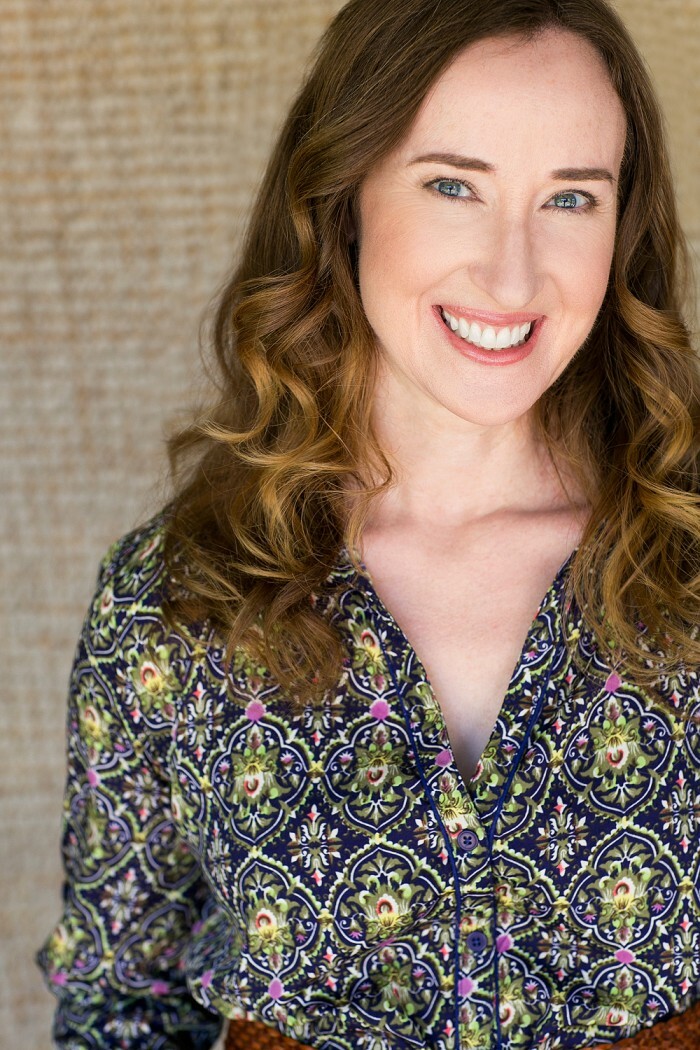 Funny, warm, and exuberant, Jeanne Simpson, pictured, would make the perfect best friend. But beyond her inviting personality, she boasts an impressive resume of acting, dancing, and choreography roles. While she’s appeared on some of the hottest shows of the past decade, Jeanne (who happens to wear a Withings Steel HR to track her dance-heavy activity) discloses that the life of a working actress is fun, but not particularly glamorous. But let’s back up to the beginning.

When Jeanne was 3, she landed her first part in a play. “I was a skunk,” she recalls. “I had black and white makeup and a giant tail, and I ran out during a picnic scene and scared everyone away even though I was tiny and stamped my foot and said, ‘I just don’t understand it.’ And the audience went crazy and laughed hysterically, and I was completely hooked. I was like, ‘Yes, I will do this for the rest of my life!’” Jeanne also began dancing at age 5, and continued starring in plays and dancing ballet throughout her youth. Her passion for the arts only grew, and she dreamed of being an actress, a dancer, or a choreographer.
Jeanne opted to attend Harvard for college, where she had the opportunity to work at the American Repertory Theater as work-study and earn her equity card. She also started her own theater company called Working Title Rep, which staged 12 shows during her undergraduate career. As a sociology major, she recalls that the head of the department was a big theater fan. “He would come to all my plays, so with my grades, he would write a review of my performance. So he’d be like, ‘This paper is an A-. However, you as Nina in The Seagull were an A+’ or whatever. It was hilarious.”
When Jeanne graduated, she moved to New York City to pursue her acting dream. “I was so naive, I thought that I’d go to New York and I would audition, and because I was a great performer, someone would discover me. And then the paper would spin and be like, ‘Simpson stars on Broadway!’ I had a completely 1930s version of what would happen.”
But becoming an actress is very tough, and Jeanne was extremely poor. She and her sister moved into the “Hungarian Hideaway,” an apartment building for expatriates. Furnished with the previous tenant’s furniture, “everything had a doily on it, and it was the saddest apartment. And the oven wouldn’t stay closed unless you propped a chair against it, which would get really hot, so you’d have to be really careful. And it had no address; you couldn’t actually ring the doorbell or come visit.” 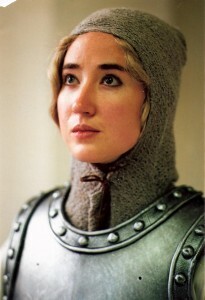 Eventually, she began to land some decent gigs. One of her first and favorite roles was on Wishbone, a children’s series that taught classic works of literature with a Jack Russell terrier as the hero. Working with a dog, whose name was Soccer, held a unique set of challenges. She recalls playing Juliet to Soccer’s Romeo, where she spent 2 days filming on a balcony with the dog trainer hiding under her skirt so she could get Soccer to look up at Jeanne on the balcony.
Wishbone also had two stunt dogs, one who would fly in a flying harness, and one who would swim. While the stunt dogs remained slim, Soccer gained so much weight from frequently being given treats that his costumes had to be let out. Jeanne says that the difference between the dogs became quite obvious as the show went on.
While on Wishbone, Jeanne also had the opportunity to play Joan of Arc, one of her favorite roles to date. As part of this role, she was involved in various stunts, including being actually set on fire. While she wore flame-retardant clothes to avoid getting hurt, she could still feel the warmth of the flames. “When they lit me on fire, as a joke, they turned out all the lights because it was the last shot of the night and left me tied up there. And everyone had planned this before as a prank, and they all just left. It was hilarious. I was laughing, everyone was laughing, and then they were like, ‘Just kidding!’ and they came back.”
Jeanne also put her choreography and dance skills to use on the animated kids’ show, Blue’s Clues. She explains, “So what they would have me do is dance each part. So I’d be like, ‘Now I’m a salt shaker. Now I’m Blue. Now I’m side table drawer.’ And they would film me actually doing that, and then the animator would take it and draw the version of the character doing whatever I was doing…But one of my last dances for them was a toilet training dance, and I was like, ‘Oh my god. I cannot believe that I am choreographing a toilet training dance.’ The lyrics were like, ‘Squat, flush, wash your hands. You just used the toilet.’…I was like, ‘I think maybe this is one of my last numbers.’” 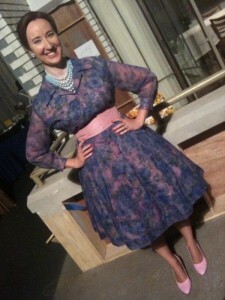 Jeanne has landed roles on a variety of critically-acclaimed shows, including Mad Men, Parks and Recreation, and How to Get Away with Murder. She loved working on Mad Men, except for the undergarments, “because they made you wear period underwear, so girdles and like…all from the sixties, real stuff. You can just barely breathe. So you spend 8 to 10 hours in that. It’s like you’re about to pass out.” One of Jeanne’s scenes required her to drive a car, but the car she got was very old and didn’t work well. “It kept idling and dying on me in the middle of the shot. And the brakes were really weird and jerky because it was so old and I didn’t quite know how to do them. So I kept almost crashing into the car in front of me, and I was so panicked.” While she spent all day driving around in circles filming the scene, that scene was ultimately cut from the show anyway.

While Jeanne has walked red carpets and loved working on such amazing shows alongside other talented actors, she maintains that the life of a working actress is “so not glamorous.” Walking us through a typical day on set, she explains that most of the time, you film on a soundstage. After going through security and checking in, “if you’re just there for a day or a week or even two weeks, you have a trailer. And the trailer’s really gross. It’s…a Port-a-Potty flush type situation that doesn’t really smell good, and if it’s hot, it’s really over air-conditioned in there, and if it’s cold, it’s really overheated because it’s so tiny. And sometimes, they have a little tiny TV, but usually it’s just a place to sit and a place to hang your clothes and a little tiny bathroom.”
Eventually, your costume is brought to you, you put it on, and you head immediately to hair and makeup. While Jeanne says that the hair and makeup crew are amazing, she explains that, “they’re under a time pressure, so they’re trying to go as quickly as they can and also they’re very honest about, you know, ‘Oh my god, you look so tired today,’ or they’re like, ‘Oh no! Why didn’t you wash your hair?’ So it’s not like a loving spa situation.”
Once transformed into your character, you are brought “sides,” tiny pieces of paper printed with the lines from your scene. “So you don’t have the whole script for the day on you. You just have your scene so that you can look them over, have them handy. And sometimes they change them at the last minute, so they’ll bring you a new side, and they’ll be like, ‘Ok, you’ve got five minutes to learn this. And it’s kind of scary. And so you have to constantly be making sure that the sides are what you thought they were. And then you wait all day. Say you go back to your trailer now that you’ve done hair and makeup, and you sit there for four hours. And then they come and get you, and they’re like, ‘Hurry, hurry! We’re ready to shoot your scene.’”
Once on the soundstage, “you don’t even get introduced to the people you’re doing the scene with, even if you’re supposed to be their best friend. So maybe in between shots, you’ll say, ‘Oh hi, I’m Jeanne,’ and they’ll say ‘Hi, I’m..’, you know, some famous person. But sometimes you don’t even get that, you just have to connect with them immediately in that moment as if you are their best friend or their mother or their dog trainer or whoever you’re playing that day, and just walk into that world as if you’ve been in that house a million times.
So you do your scenes, and it’s chaos. People running around, taking pictures of you for continuity and all this stuff, and then it gets really quiet, and they ring a bell, and they’re like, ‘Action!’ And it’s deadly quiet. And if it’s your line, it’s a little shocking because you haven’t worked all day. There’s no warm-up like in a play. You just jump into a moment. Like maybe it’s a moment where you’re supposed to burst into tears, and they’re like, ‘Quiet. Action.’ And you have to just be in that moment. And then, ‘Cut,’ maybe two seconds later, or ‘Cut’ because something that has nothing to do with you happened. So you have to be able to do your work under really weird circumstances, and just turn it off and turn it on like a faucet constantly.”
Once your work for the show is done, you leave and probably never see those people again. “And that’s the life of an actor. An actor who’s just a working actor.”
***
Interested in following Jeanne’s fitness adventures for Withings? Check out some of her articles below, and go to her Facebook page to learn how to take a dance class with her anywhere in the world:
TAProbics: Dance Your Heart Out With A Unique Cardio Workout
My 10,000 Step Tour In Los Angeles 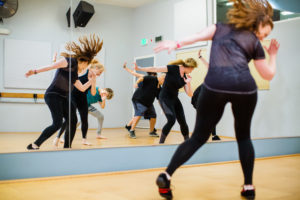